This FAQ collects some important questions and answers about Sudoku exercises.

Where does the name of the exercises come from?

he name is borrowed from the Japanese language and is the short form of an idiom: “Sūji wa dokushin ni kagiru”. In english, a translation would read something like: “You have to isolate the numbers”.

How does a Sudoku puzzle work?

The tasks are made up of a grid of nine by nine small cells divided into nine large squares (also called blocks). It consists of a total of 81 small cells. The aim of the task is to sort the digits from 1 to 9 into the small cells in such a way that each of the digits appears exactly once in each row, in each column and in each large square (block).
Some of the cells are pre-filled with numbers from which the remaining cells can be logically deduced. Each cell must have a unique solution. If a cell cannot be solved uniquely, the Sudoku task is not validly solvable.

Why are sudokus so popular?

These tasks can be found in almost every newspaper and magazine. Many people appreciate the simple rules, which nevertheless result in very different levels of difficulty and thus continuous puzzle fun and hours of pondering. The grids of tasks are highly recognizable and you can get started as soon as you have a pen at hand. In addition, the puzzles (because they are only based on logic and numbers) work in every language and in every culture.

Do you need math skills?

Numbers are the main elements to enter in the Sudoku field at first glance, there is no need to calculate or use math skills. You can replace the numbers with letters or other symbols without fundamentally changing the rules.

Is there a time limit for solving?

Basically, there is no fixed time specification or limit. Some publications give a target in minutes as a guide. In some apps or websites, the time is stopped until you have completely solved the task in order to compare gamers with each other or to determine a ranking.
There are occasional ratings and tables for specific tasks of a set level of difficulty that you can use to compare your own speed.

Which mental operations does a Sudoku require or train?

Various mental operations are required when solving. You have to keep track of which numbers or cells offer good solutions. Logical thinking is probably the most important mental operation. Deciding for a cell which digits can be excluded until the end only one possible alternative makes sense.
Some articles report that the tasks would train memory. For each cell to be solved, you have to remember something in the short term, but a longer-term memory, lasting minutes or even hours, is necessary. Thus, one cannot speak of memory training. A general increase in the intelligence quotient (IQ) cannot be expected either. Because the mental operations are too special. To achieve this it is better to combine different types of other brain training tasks.

Can every puzzle be solved?

The tasks offered in magazines and apps should be solvable. This means that all cells can be uniquely solved by logical rules or excluding certan digits. You don’t end up in the situation where several digits are possible for two or more cells and you can “choose” or “guess” a combination. Finding the correct solution can of course be very difficult. In this case, it helps to look at the known solution strategies again. Perhaps there is another tactic that you have not yet used.
In the mathematical theory of the tasks, there is the (unproven) assumption that a Sudoku must have at least 16 or 17 cells preassigned so that it can be solved.

How do you recognize the level of difficulty of a field?

The number of filled cells is a good measure of the difficulty of a Sudoku grid. The more numbers are pre-filled, the easier it is to solve. Usually there are starting points for simply filling in rows, columns and groups (3 times 3) because only one number is missing. Of course, there can also be constellations in a very far solved Sudoku that are difficult to solve, but these are the exceptions.

Conversely, one can say that a task with many empty cells (to be solved) will probably be difficult.

Where can I find the exercises as PDF?

We provide a collection of sudoku exercises as free PDF download. Every document contains some fields with different skill levels from easy to hard. All the solutions are included as well. You can print at home or share these documents with family and friends:

If you also have questions about tasks or other topics in the areas of puzzles and brain jogging, please send us an email.

Start Your free Brain Training with the Brainsport-Trainer App and keep your brain fit and sharp. 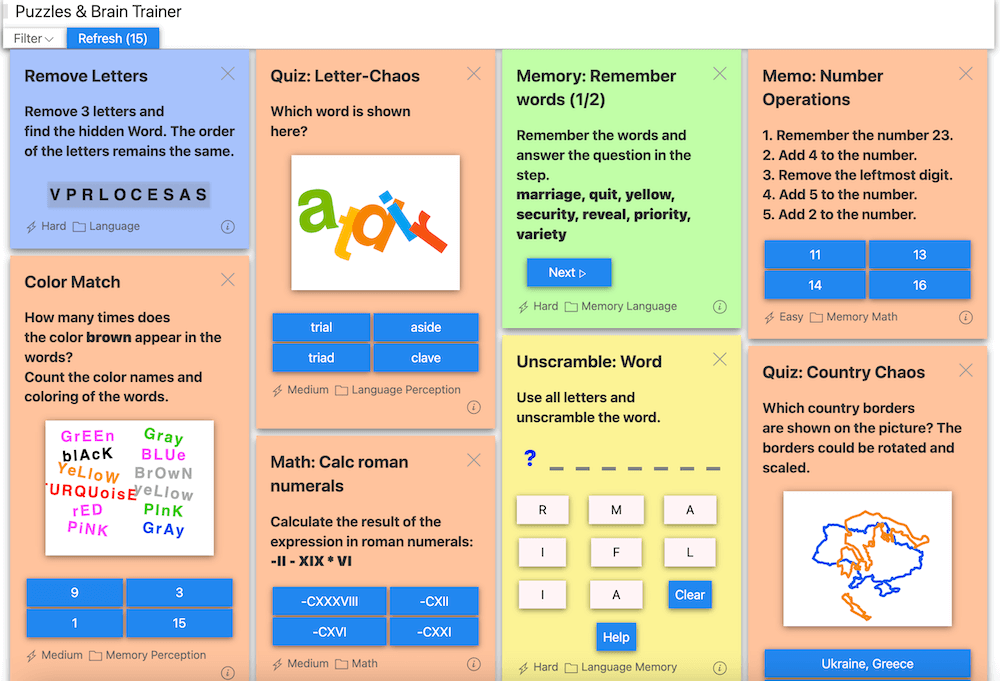